In this fleet-footed world, no business wants to make a bad investment. Even as an individual, we look for ratings, reviews, pricing, images, answering questions, and much more before finally purchasing any product online. Ultimately everyone starts to engage in their own level of research regarding the services/products they want to purchase. Mobile app development services also require thorough research.

We have learned that having a user-friendly website is never enough to grow immensely in the fast few years. It’s time when the market is thriving on the digital model, and you need to leverage the benefit from every technology that complements your business. Some people browse through to their desktops or laptops as having your business website is essential, and some people have access to smartphones, so they want a mobile app for the same services. 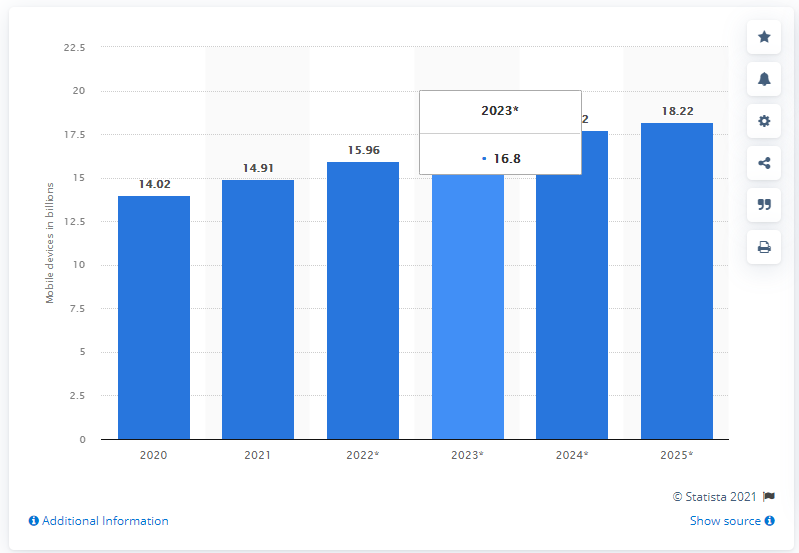 According to the latest report from Statista, the number of smartphones operating worldwide is about to touch 15 billion by the end of the year. The report states the current scenario and affirms that mobile devices will reach 18.2 billion by 2025.

The reason behind starting this blog with the context of the wrong investment is simple. There are many methods out there for mobile app development, and choosing the right one for your app development can be daunting. For innovative app development for your business, you not only have to choose the right technology. You may need to meditate over the factors like framework, features, budget, and most importantly, the programming language of the development. In short, it is going to eat up around 6-8 months of your time which means you can’t go wrong with it.

Out of so many programming languages used for app development, we are going to discuss Python for mobile apps and whether it is a good choice or not. You will also get to know why even considering Python is a big deal to create mobile apps for business. We want to clear your mind so you can decide in which direction to move ahead.

Python is Valuable for Future

Python, which is frequently used by scientific and statistics communities, has a great fellowship supporting it. The developers are in love with the simplicity, development speed, flexibility, portability that Python offers. The strong community whips up a library within the desired time to make things simpler for other programmers. Possibly this is one of the important reasons why it doesn’t degrade with time and is still in demand even after 30 years of its release.

Fun Fact – There are already 200,000 custom-built user uploaded software packages to an online repository for use.

As has been said, Python is deemed as the favorite language for developers worldwide. The last few years have been amazing for Python lovers as this scalable language could leave indelible prints over the software development market along with data science and artificial intelligence.

The cool thing about cross-platform development using Python is its wider reach; these apps allow businesses to reach a much larger audience making it cherished by almost every business planning to scale their services/products.

You will see some big names in the list, as you probably didn’t know they used Python for their app development. 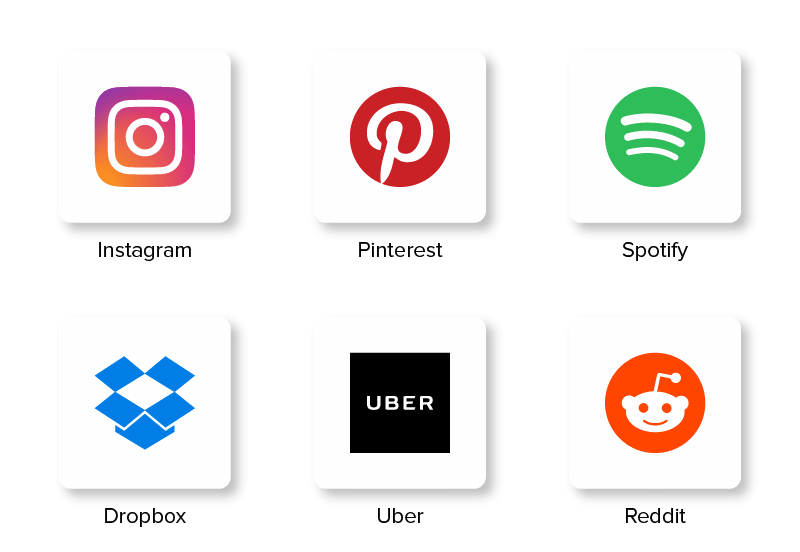 Instagram, one of the most celebrated social platforms on the internet, is developed using Python. If someone says apps built-in Python are not scalable, tell them about the app with 500 million+ active users every day.

According to Instagram’s Engineering team, its web services were improved because of Python. World’s largest deployment through the Django web framework is featured by Instagram only.

The World Largest OTT platform, has also used Python for their worldwide app development. We do not have to tell you the popularity of Netflix among the audience from all over the globe. Currently, Netflix has 74 million Subscribers from the U.S. and Canada only. In one interview, Netflix confirmed they used Python for app development. Their talented developers chose it for reasons like a standard library, expressive syntax, strong community, third-party libraries, etc. Want to know more about Python at Netflix? Visit the Netflix Tech Blog.

A platform where memes and theories originate, Reddit also runs on Python. Initially, Reddit was programmed in Common Lisp, but they switched to Python because of broader access to code libraries and development flexibilities. Python offers this innovative “batteries included” approach with its app development, and Reddit is the perfect representation.

Running an app like Reddit is a complex task because of the features it offers. The intricate feature list includes registering user posts in thousands of categories, voting up and down, converting text into different languages, and many more. But once again, Python proves how it is smoothly managing the workload and complex functionality.

]We already mentioned you would be surprised to see the list as it is filled with some of the biggest names in the market. The next one is the world’s largest on-demand taxi app which is famously known as Uber.

According to the team of Engineers at Uber, they write code in Python, Go, Node.js and Java. Moreover, they focused on two main languages: Node.js for the marketplace team and Python for every other development.

Spotify is another name in the list that doesn’t need any introduction. With more than 172 million premium subscribers and 365 million subscribers in total, Spotify is spitting facts that Python app development can handle everything flawlessly.

Officials at Spotify believe speed was a significant concern for them while planning for development, and that’s why they finalized on Python. They are heavily using Python async frameworks to help services that are IO-bound.

We are pretty sure most of you have used all these listed apps once in your lifetime. There is a reason why these top companies had chosen Python for app development. It is perfect for building scalable, efficient, and complex apps without much hassle. There is no denying the fact that top tech companies are searching for effective and capable Python development services that can understand their needs and then use Python to build apps for their business.

Get Started With Python Frameworks for the App Development

Python has two major frameworks which are globally used for app development. Best of everything, you can use the same code base with minor modifications to deploy apps to both android and iOS operating systems. The two most chosen frameworks are Kivy and BeeWare. Let’s understand them in depth.

If you want your app to have a native look and feel, then BeeWare is perfect for such development. It fully supports a fully native user experience for each platform.

What Makes BeeWare a Great Option?

What Types of Apps Can You Build Using Python? 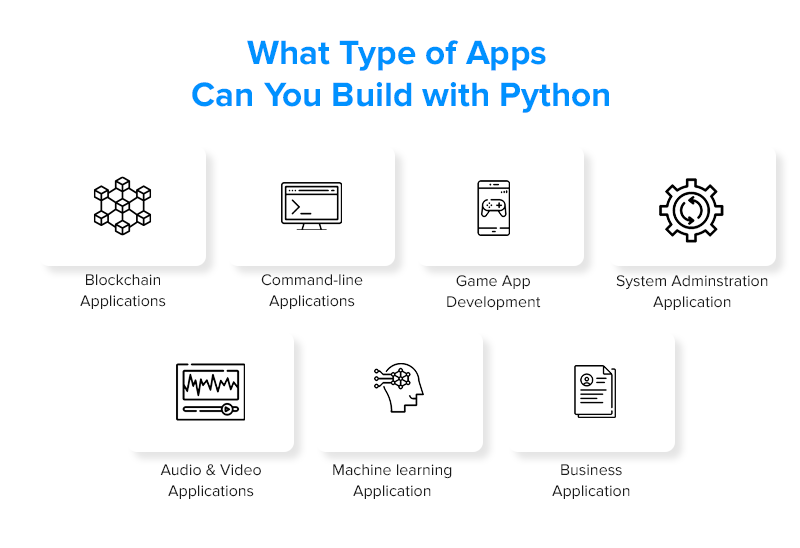 If Netflix can develop a robust app using Python, you can use the same to create other types of video and audio mobile apps. Python is effective in delivering apps that offer high performance. Youtube is one such example of popular mobile apps in the audio and video category built using Python. The python development company helps with comprehensive app development and analyses audio and video content off the internet.

Almost half of the world is gaming enthusiasts, and if you feel amazed to know that Battlefield 2 was created using Python, then seriously, are you even reading this blog from the start? Many other popular games like EVE Online, Pirates of Caribbean, etc. are written using Python. With the experts of python development services standing by your side, you can create some fantastic games with high-level design.

Machine Learning development is the latest fad among millennials. For those who do know, ML is an algorithm-based technology that feeds data to operating systems to make intelligent decisions. Earlier, machine learning mobile app development was challenging, but now we have Python for machine learning applications.

Talking about the current craze, then blockchain is right up there with machine learning. The idea of blockchain development was ambitious before python app development, but now it is as easy as shelling peas. It seems like app development using Python was specially invented to create innovative blockchain apps. Using python frameworks like Flask, developers can use HTTP requests to interact with their blockchain over the internet to create termination points for distinct functions of blockchain.

All things considered, we found that app development using a python programming language is rapid and flexible at the same time. We are pretty sure Python is the present, and because of its versatility, it is the future. We are already seeing different kinds of mobile apps using Python, and we will also see different types of mobile applications in the future.

Suppose you are nagging with the fact that Python is not native to either Android or iOS, as you may experience some inconsistencies between both the app versions. In that case, you are forgetting that a strong community supports Python. Luckily, such setbacks can be vanished by working with a professional and experienced python development company.

Creative & advanced web solutions for your diverse needs! You Dream it, ICORE Achieves it!